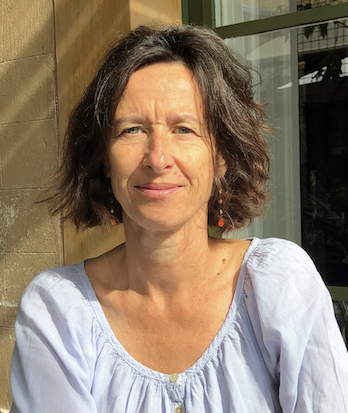 To celebrate the milestone of 45 years of EU-ASEAN relations, the European Union Delegation to the ASEAN, together with the ASEAN Secretariat, organised the first-ever ASEAN-EU Cultural Festival. The festival highlights the value of culture as a vital element in international relations and its role in building and promoting understanding within and between societies.

The festival took place in the ASEAN cities of Bangkok, Jakarta, and Phnom Penh, as well as online, from 19 to 25 September 2022. As a flagship cultural brand, it explored the enormous potential and dynamic synergy of intercultural collaborations and artistic co-creations between the two continents.

With the theme Youth Voices, the one-week festival took a closer look at the youth and brought together young cultural activists from both regions. A new generation of artists shared their ideas and hopes for the future, learned from each other, and built connections, thereby contributing to a stronger ASEAN-EU relations. 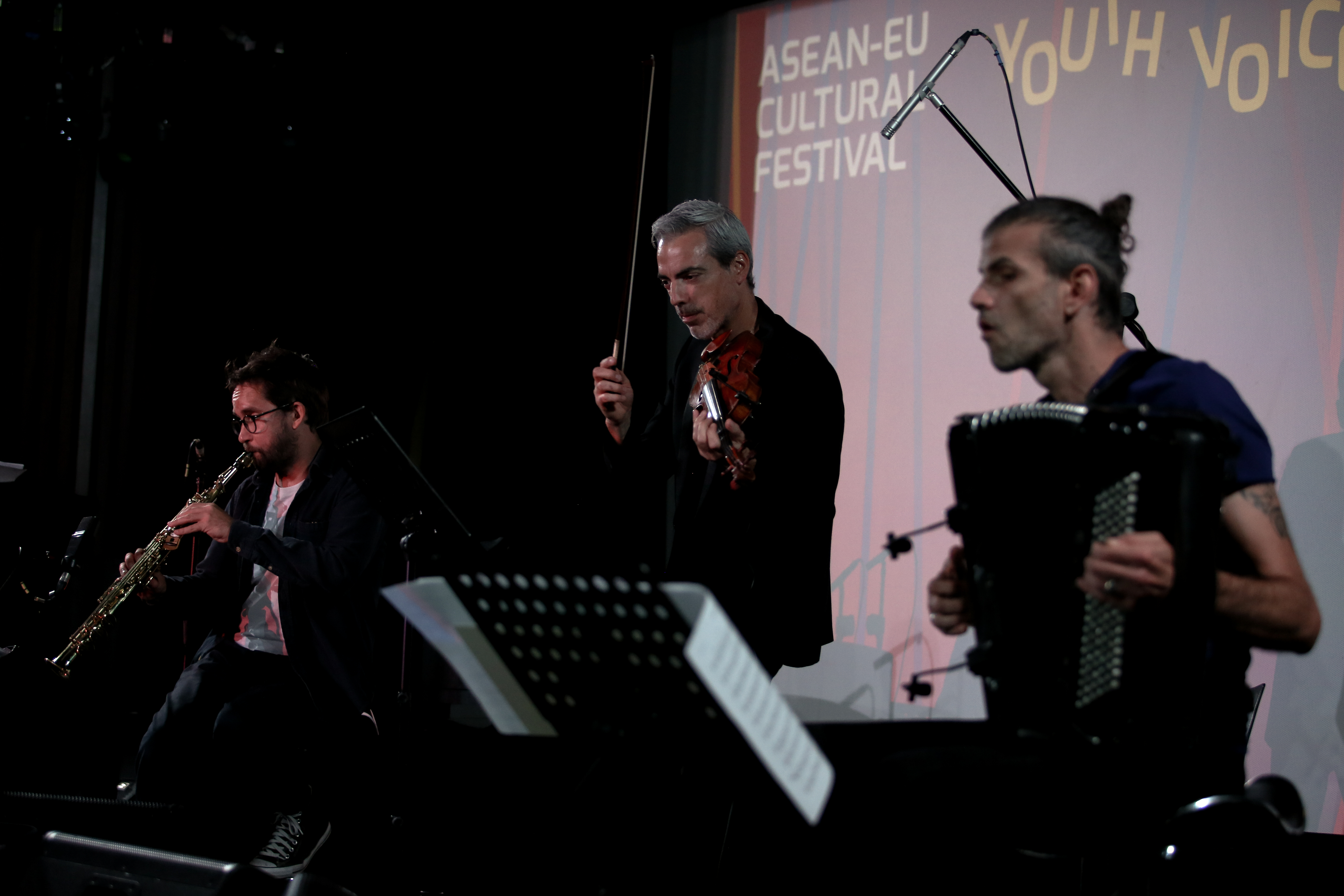 The French trio playing at the Festival's opening in Jakarta.

The festival opened in Jakarta with a jazz concert that conveyed the musicians’ passion for new soundscapes and new sonorities, in which sounds and genres intertwined and crossed.

The French trio of Vincent Peirani, Émile Parisien, and Sébastien Surel, joined by one of the most brilliant musicians of the Indonesian archipelago, Sri Hanuraga, took the audience on a musical journey where traditional Southeast Asian melodies and European original compositions resonated and formed dialogues, overcoming language barriers.

In the words of Vincent Peirani: “With music, we can easily communicate, even if we don’t speak the same language. This is a really good way to meet people and cultures and to be inspired by culture and people. Music—and art in general—helps to connect. We are just a family.”

The music programme included an online concert which saw Joey Alexander, acclaimed pianist from Indonesia, playing with the French accordionist Vincent Peirani, a premiere duo which was recorded in France. It also included a jazz and a pop playlist, where musicians from different backgrounds created unexplored soundscapes, while revisiting traditional melodies.

The festival celebrated the diversity and depth of Asian and European cinema. The films, shown online in Phnom Penh and Bangkok, reflected the hopes of a rising generation that respects individual and collective rights: the right of women to be emancipated from the authority of men, the right of young people to live in a better world, the right of the handicapped to be integrated into society, and the right of migrants to be treated as human beings.

As underlined by Emma Benestan, one of the film directors: “No matter our cultural belonging, who we are, where we come from, we all face the same problems, and this is what unites one another as human beings.” 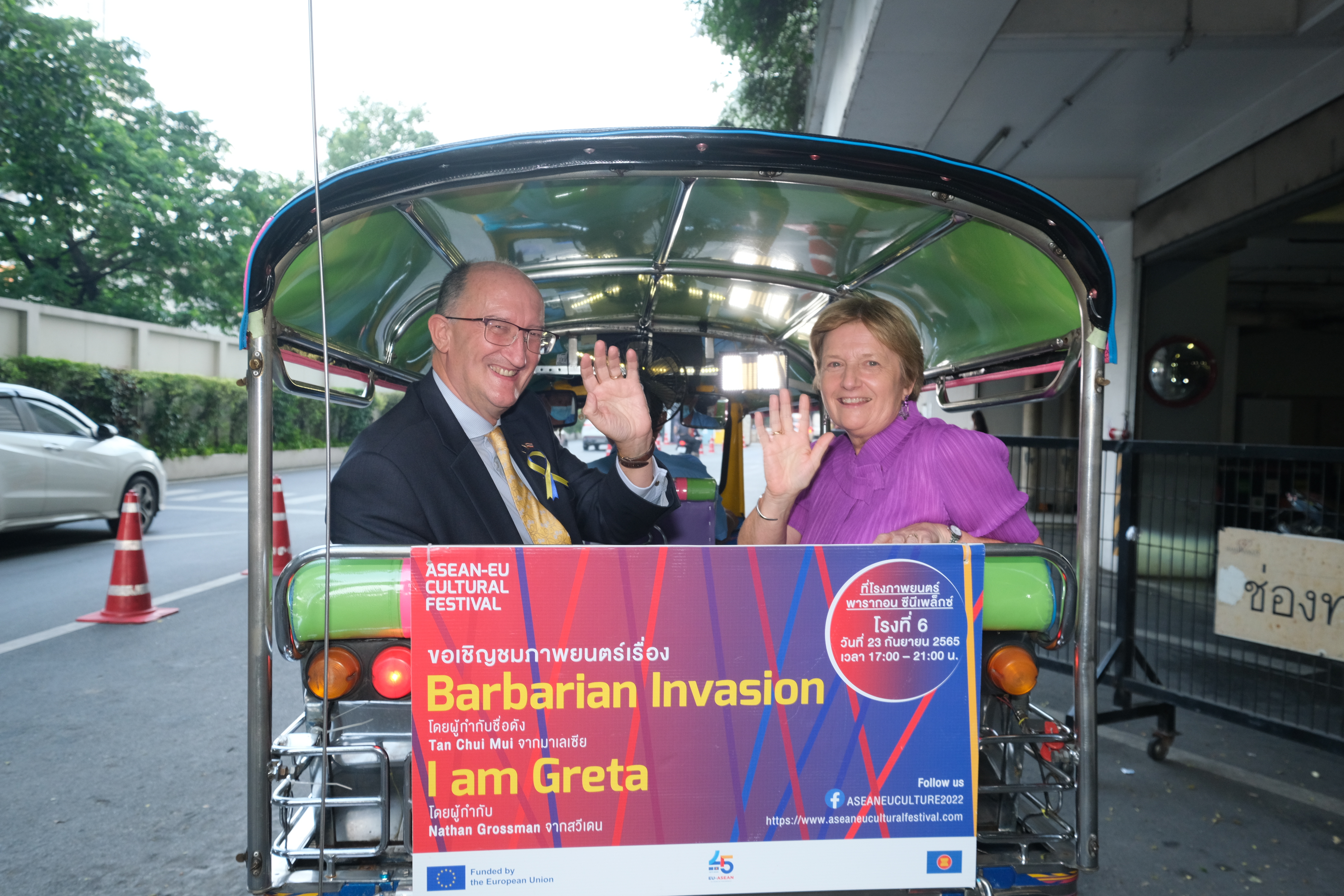 David Daly, the Ambassador of the European Union to Thailand, and his wife attend the Festival in Bangkok.

The partnership through visual arts

Visual arts were also part of the festival. The programme included two online exhibitions, a photo exhibition titled “45 Years of ASEAN- EU Dialogue Relations” that gave a historical perspective about the fruitful cooperation among the two organisations, and the virtual reality exhibition, “Butterflies count not months but moments and have enough time.”

This last exhibition illustrated the artistic perspectives of a young generation of ASEAN and EU artists on the idea of nature as a site of environmental and philosophical imagination, and on the notion of sustainability: Is the environment simply the place we live in, or also the place we leave behind? Does the term “sustainability” resonate equally in different parts of the world, or do cultural and social beliefs and behaviours tint it? Do we identify with our environment?

Featuring videos spanning from documentaries to animations and performances, the exhibition centred on shared social issues through the eyes of the youth: from the macro consequences of climate change to the micro impact of local governments on their communities, and from social action to cultural justice, with the objective of inspiring inclusive thinking across borders.

The festival showcased artistic excellence and collaborations between artists in the ASEAN and the EU. Through cross-regional exchanges in the cultural field, the festival strengthened people-to-people links and connectivity between Europe and Southeast Asia in line with the EU- ASEAN Strategic Partnership.

In the words of Loredana Pazzini- Paracciani, curator of the virtual reality exhibition: “Culture—and the visual arts in particular—is key to creating connections between diverse cultures and to fostering reflection and mutual support for people to understand each other. I profoundly believe in art as a lingua franca, i.e. a language that has a wider and more profound reach than can be achieved just by words, a language with a unique ability to move people regardless of origin, gender, or affiliation.”