Climate change is inevitable; humanity and its ecosystems have already been impacted by warming of 1°C since pre-industrial times and humanity is on the path towards global warming of 1.5°C, with the expected emergence of unprecedented climatic conditions over the next decade.

Can this disastrous track be altered? Yes, given that the key to creating a more secure and stable world has already begun with cooperation between countries under the Paris Agreement. All ASEAN Member States have ratified the Paris Agreement and several initiatives have been undertaken to mainstream climate change within the ASEAN community; one of these being the Kuala Lumpur Declaration on ASEAN 2025: Forging Ahead Together. This was signed by all the Member States to complement the UN 2030 Agenda for Sustainable Development. This agreement mainstreams climate change adaptation and disaster risk reduction for the whole region.

What then is climate change adaptation for the region? Adaptation involves anticipating the long-term adverse effects of climate change and taking appropriate action to prevent or minimise potential damage. It is more effective when complemented by immediate and near-term disaster risk reduction measures. This synergy draws upon shared information and goals, scientific, technical and financial support, engaging with targeted stakeholders and more. It has been shown that well planned, early action saves lives, and money.

Floods, droughts, windstorms, soil erosion, salt-water intrusion, sea-level rise, forest fires, land degradation, marine-life destruction, and attendant diseases are some of the climate-related threats projected in the region. With greater frequency and intensity of the hazards, many sectors will suffer devastating effects.

Hence, priority sectors are being identified in countries in the region to lead the way for mitigation plans and actions. For example, in agriculture, the decrease in rice grain yield impacts rice production and affects the lives and livelihoods of many. The health sector needs vital attention; water and vector–borne diseases like malaria and dengue can result in high fatalities. Water-related and coastal hazards affect sectors such as fisheries and tourism. Marine biomass production will be affected and fish catch potential will be reduced. All countries in the region have identified projected temperature increase, dry conditions, and forest fires that will affect populations, plants and livestock.

The impacts of climate change are also expected to be felt on the infrastructure resources in the ASEAN region. Coastal transport, ports and military installations would be increasingly exposed to rising sea levels, storm surges, and flooding. Extreme weather events in adjoining countries could affect energy production, transportation, and transmission, and impact regional energy security.

Building resilience to expected climate-related disasters due to global warming of 1.5°C alone is just not enough. Global warming could also trigger migration between countries; this could further exacerbate the existing demands placed on the various sectors, like food and clean water production.

But is migration an impact of climate change or is it an adaptation strategy? Some may dismiss this as semantics but depending on the platform of such discussions, there are repercussions, specifically on assigning accountability for human-induced climate change. The reality is that migration is an inevitable adaptation strategy in some cases. For example, when coastal lands beyond the shores of countries in the region are submerged due to sea level rise, affected communities have no choice but to migrate, and the ASEAN region may offer a closer, more hospitable alternative. Who is accountable for the plight of this community? These are difficult conversations that have to start immediately among countries in the region so that the challenge can be strategically addressed. 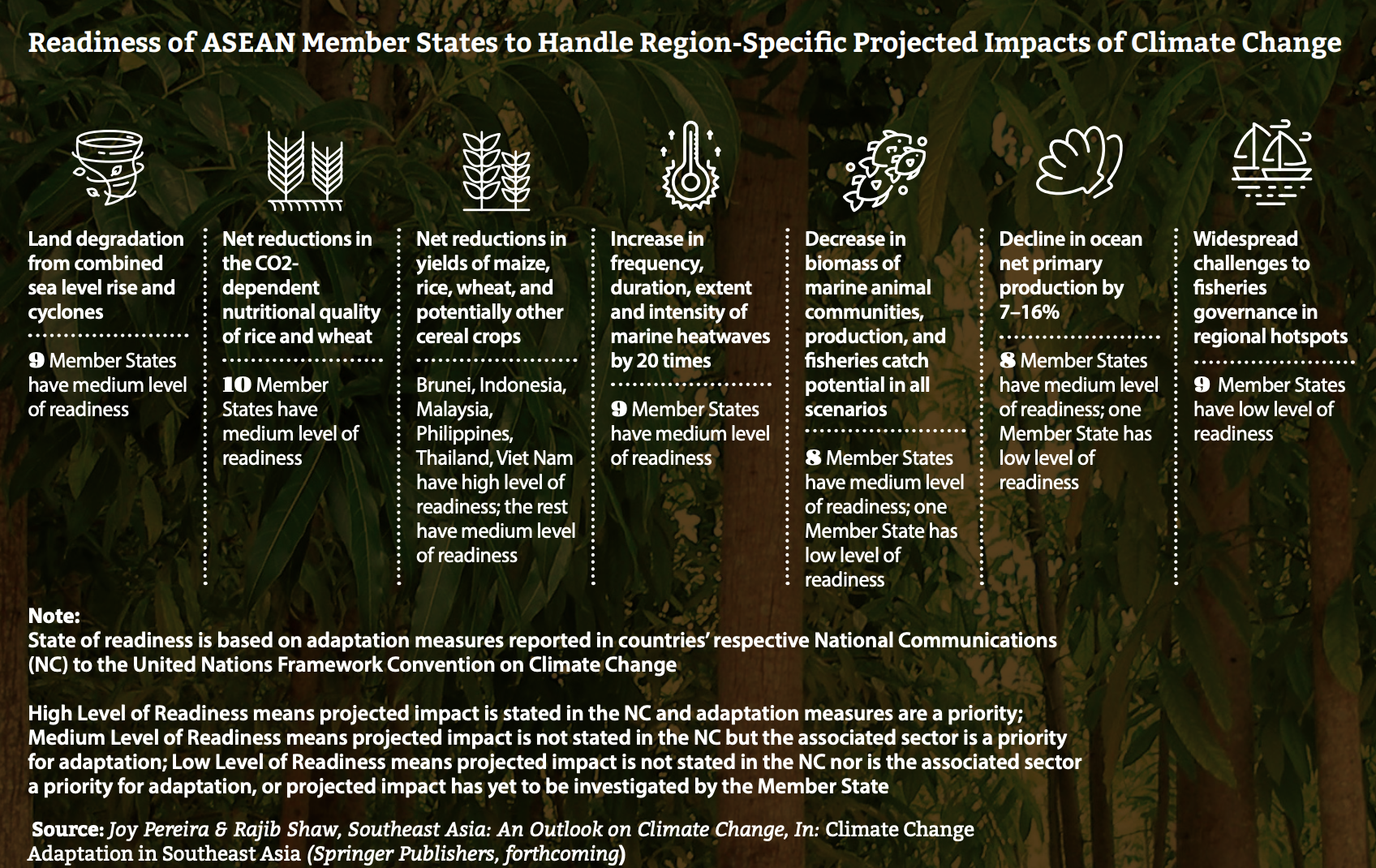 Recent findings reveal that overall, there is only a medium level of readiness in handling the projected impacts, except for prioritised adaptation measures to address reduction in rice yields in several countries in the region such as Brunei Darussalam, Indonesia, Malaysia, the Philippines, Thailand and Viet Nam. The impacts of extreme events associated with climate change are site specific; therefore, using the best available scientific information at the local level, with the involvement of the local expertise to develop adaptation plans that is integrated with disaster risk reduction, becomes necessary. The participatory process starts from the identification of areas that are susceptible to hazards, sources of vulnerability, development of adaptation planning and action, and to finally setting the monitoring and evaluation framework. Pilot projects are being initiated in many countries at the local level. However, in order to achieve successful implementation on the ground, these initiatives should be action-oriented, have implicit capacity building, awareness raising, and mainstreaming components.

For adaptation plans in any country to be most effective, regional collaborations come into play. One such example is the ASEAN Partner Institutions on Climate Change Adaptation or ASEANadapt. Established in 2016 to facilitate smoother regional engagement, it came into fruition through research of the ASEAN-India Green Fund Project. ASEAN adapt is composed of researchers and practitioners from all Member States. By identifying national needs and priorities, ASEAN adapt is able to share locally tested tools, techniques, methods, approaches, and innovations that are applicable across the 10 Member States. Self-organised and self-sustaining long-term collaborative entities such as ASEANadapt should be recognised and brought under the aegis of ASEAN to scale-up their efforts.

In conclusion, transitioning to a 1.5°C World calls for cohesive collaboration to achieve astute adaptation, amplified engagement, inspired innovation, smart partnerships, and greater ambition on the part of ASEAN countries. 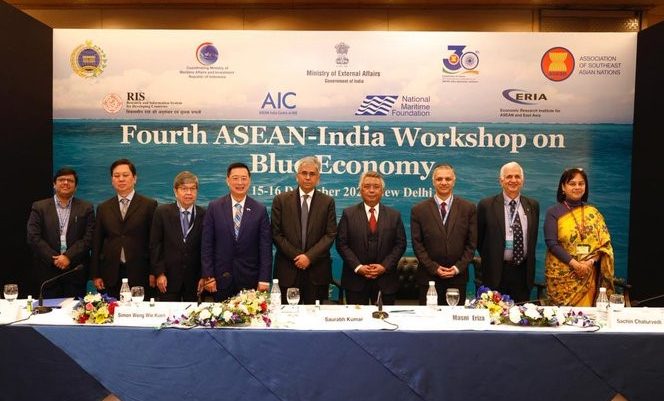 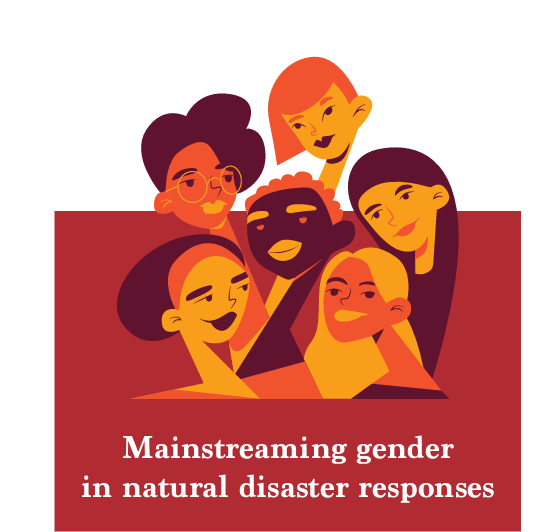