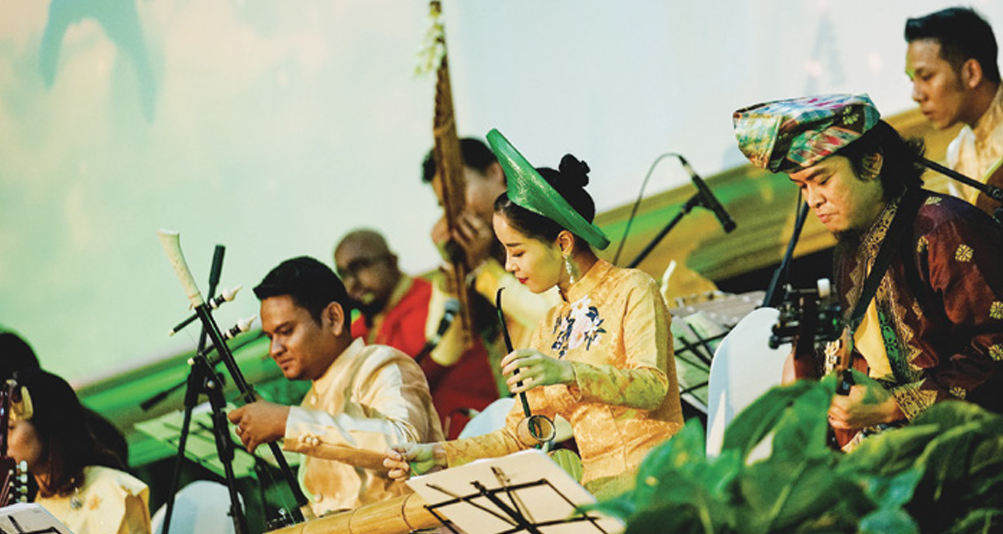 ASEAN is taking concrete steps to create meaningful conversations on ASEAN Identity, in both official and public discourse.

The ASEAN Awareness Poll commissioned by the ASEAN Secretariat in 2018 shows that 96% of over 4,400 respondents in the 10 Member States are aware of ASEAN. Two out of three respondents believe that a shared identity is essential in creating a stronger region, and the top factors identified are economy, traditions, and values as well as a common vision. Yet, fewer than one-third claim to have knowledge of the ASEAN Community and its three pillars. Also, it is worthwhile to note that nine out of 10 respondents identified themselves firstly by nationality (98%), then as an Asian (96%) and as an ASEAN Citizen (94%).

When the ASEAN Committee on Culture and Information (ASEAN-COCI) was established in October 1978, people-to-people and cultural exchanges became part of the efforts to promote a regional sense of belonging and awareness of ASEAN. Activities ranged from policy discussions, cultural showcases, museums, libraries to performing and contemporary arts, creative industries, exhibitions, and food festivals.

To foster a greater sense of community, ASEAN has earmarked 2020 as the Year of ASEAN Identity. It was launched on 21 January, along with a logo design competition. The ASEAN Identity Symposium will be convened in August, where policy makers, historians, academics, journalists, artists, and creatives can openly share views on what constitutes an ASEAN Identity.

For ASEAN identity to flourish, citizens must stay invested in appreciating and understanding ASEAN and its developments. To achieve this, ASEAN needs to enhance its storytelling: What is ASEAN Identity? What does ASEAN stand for? What can we celebrate together as one region, one community, one people?

Firstly, the development of ASEAN Identity would emanate from shared common values and principles guiding ASEAN, namely, respect, peace and security, prosperity, non-interference, abiding by rules of trade and international laws, consultation/dialogue, unity in diversity, inclusiveness, and ASEAN Centrality in the conduct of external relations—which are invariably known as the ASEAN Way. These key elements lent itself to ASEAN as a uniquely distinct entity, positioning ASEAN as second to none.

Secondly, ASEAN Identity is brewed by its rich f lavours of diverse but shared historical, heritage and cultural characteristics, many of which existed long before the establishment of ASEAN. What would be these cultural characteristics and values that bring out ASEAN Identity to fore? Also, where history matters, we could more proactively promote and celebrate our shared narrative of the extensive and interconnected histories of the region, as opposed to the experiences of decolonisation, which had been the mainstay of the national narratives of many countries in the region.

With the prevalence of popular digital culture, work is also underway to produce human interest stories that cast a spotlight on the benefits of ASEAN Community for individuals and communities through podcasts, webtoons, vlogs, e-booklet that inform netizens on ASEAN developments. We have also put in place a cultural and heritage digital archive to ignite our people’s interest in and appreciation for the rich cultural vibrancy and dynamism in the region. These efforts are incremental but important steps to capture the hearts and excite the minds especially the youth who are the next generation to take forward what the forefathers had built more than 50 years ago.

Coordinated efforts will be ramped up to use the social media to tell ASEAN stories that matter to our people so as to create the emotional connections, and to lend voices to the youth and ordinary people to share their views and concerns. While people in the region may generally feel a common bond, more could be done to foster a stronger regional sense of belonging and ownership to the Community that ASEAN is developing. ASEAN is also exploring various platforms including digital apps, social media forums, among others, to create a more enabling and participatory environment for ASEAN citizens to share their views, and to proactively support ASEAN initiatives.

ASEAN is looking into the past as much as it does into the future to develop the narrative of ASEAN Identity. The pursuit of identity-building is a multi-stakeholder initiative that requires the efforts of people and communities at all levels to contribute to the process. While an erstwhile socially and politically constructed identity is important in and of itself, ASEAN is aware of the need to broaden the conversation by taking into consideration of the fast changing landscape, especially the aspirations of our youth who make up more than a third of the 642 million people in the region.

Moving forward, officials working in ASEAN, including staff of the ASEAN Secretariat, are cognisant of our need to foster ASEAN Identity as much in name, as in actions. The key is to make the ASEAN’s presence felt on the everyday lives of the people in the region, and a shared identity that can resonate with all. Only by doing so can our people see the value of ASEAN in their lives, and for ASEAN to build and foster a shared Identity that could f lourish and prevail over time.